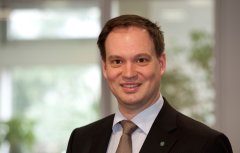 Ralf is full professor of software engineering at the Karlsruhe Institute of Technology (KIT) and director at the FZI - Rseearch center for information technology in Kalsruhe, Germany. He graduated in informatics at the Universität Karlsruhe from 1992 to 1997. I received the B.Sc. 1997. From May 1997 to July 1998 Ralf has been a member of the research staff of the Software Engineering Group of the University of Kaiserslautern. From August 1998 till July 2001, he was a fellow of the Graduiertenkolleg “Beherrschbarkeit komplexer Systeme” at the Faculty of Informatics at the Universität Karlsruhe. After his dissertation about “Parameterised Contracts for Component Protocol Adaption” he worked from August 2001 till January 2003 as a Senior Research Scientist at the Distributed Systems Technology Centre (DSTC), Pty Ltd at the Monash University site at Melbourne, Australia. From March 2003 until January 2006, he was Juniorprofessor for Software-Engineering at the Carl von Ossietzky University of Oldenburg and I was the head of the Emmy-Noether DFG Junior Research Group “Palladio”, working on Procedures and Tools for constructing Component based Software Architectures with predictable properties. This project was funded in the context of the “DFG-Aktionsplan Informatik”. Since February 2006, he am heading the chair for Software-Design and -Quality (SDQ) at the Department of Computer Science at the University of Karlsruhe, Germany. Since than he is also director of the FZI - Research Center fir Information Technology in Karlsruhe. He rejected the offers of appointment to full professor of software engineering at the Universites of Osnabrück and Hamburg as well as Technical University of Munich (TUM). He is a member of the GI (Gesellschaft für Informatik, e.V.), ACM, the IEEE and the IEEE Computer Society. Ralf is chairing the software engineering division of the GI, founded the software architecture section at GI and is member of the board of the GI.