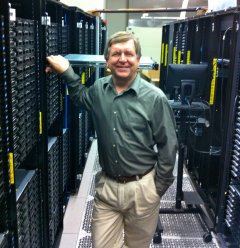 Bio: Dr. Alan Sill is Managing Director of the High Performance Computing Center and Adjunct Professor of Physics at Texas Tech University. He also holds positions as Co-Director for the multi-university US National Science Foundation Cloud and Autonomic Computing Industry/University Cooperative Research Center and Visiting Professor of Distributed Computing at University of Derby, UK. He is an internationally recognized expert on large-scale advanced computing systems and software, and has played a strong role in design and creation of many scientific distributed computing, cloud and grid development projects and associated standards efforts. Dr. Sill currently serves as President of the Open Grid Forum and a member of the advisory boards for several international cloud and distributed computing projects.

Dr. Sill has coordinated large-scale scientific software development projects for over four decades, including national and international-scale grid, cloud and distributed computing operational infrastructures utilizing computational clusters, and distributed database and data access systems used by multiple user communities. His recent work has focused on extending the capabilities of such systems in both directions across the industry/university boundary and on promotion of best practices for advanced distributed computing in data-intensive settings. He is an author on over 600 peer-reviewed publications covering topics in particle and nuclear physics, scientific computation, cosmic ray and radioisotope analysis, and has organized and chaired conferences on cloud and grid computing, autonomic computing, cosmic ray detectors and authentication technologies.

Dr. Sill participated in the formation of several collaborative scientific computing efforts, including the Open Science Grid (OSG), the Southeastern Universities Research Association SURAgrid, and Texas Internet Grid for Research and Education (TIGRE) projects. He has contributed to national and international roadmap processes for cloud and grid computing, including advisory groups for various branches of the US government and the European Commission, as well as to working groups on cloud standards in a number of international standards development organizations. He is a charter and current member representing the Open Grid Forum for The Americas Grid Policy Management Authority, the arm of the Interoperable Global Trust Federation (IGTF) responsible for accreditation of grid credential authorities for North, South and Central America.

Dr. Sill earned his Bachelors degree from Lewis and Clark College in Physics and Mathematics in 1977, and after two years in industry in the Research Division at Rockwell International, went on to earn his Ph.D in Particle Physics from The American University in 1987. He held positions as a Research Associate, Senior Research Associate and Texas National Laboratory Research Commission SSC National Fellow at the University of Rochester from 1986-1992, during which time his work focused on high energy physics and computational development topics at the National Laboratory for High Energy Physics in Japan, the Superconducting Super Collider design project and the Collider Detector at Fermilab in the USA.

Dr. Sill came to Texas Tech in 1992 as Assistant Professor of Physics, holding the positions of Associate Professor (1997-2000) and Research Professor (2000-2005) in the Physics Department before joining the TTU High Performance Computing Center in 2005. His scientific research during this period spanned a range of topics in high energy particle physics, scientific computing, and cosmic ray and particle physics detector development. In addition to his work in distributed computing, he was deeply involved in silicon detector development and design for the Collider Detector at Fermilab, in related electronics fabrication, testing and development, and in data analysis related to the discovery of the top quark in 1995 by the CDF and DZero collaborations.

Dr. Sill has held official formal visiting positions as Guest Scientist in the Computing Division at Fermi National Accelerator Laboratory (1992-1993 and 1999), Visiting Scientist at the Lawrence Berkeley National Laboratory (1998 and 1999, joint with Fermilab), Research Associate at the University of Glasgow (2002) and Research Scientist at the University of Chicago Enrico Fermi Institute (2005). He is a current member of the Compact Muon Solenoid experimental team at the European Laboratory for Particle Physics (CERN) and a past member of the SLAC E-136 and E-139, AMY, ACCESS and CDF high energy physics collaborations, and the CERN RD-52 detector development research team, and Vice President of Standards of OGF from early 2010 through mid-2015. His personal hobbies include outdoor pursuits and observational astronomy.